Shortly after I was married, I talked to a doctor about a problem that I had been trying to ignore. For several years I had suffered from pain down the back of my legs that was especially bad at night. He diagnosed it as sciatica and told me I could have an operation, but he advised against it. He said it would be best if I could learn to live with the pain.

The diagnosis scared me. I certainly didn’t want to live with the pain! I was a relatively new student of Christian Science, and the next day I decided it was time to get serious about addressing this problem through Christian Science. I called a Christian Science practitioner for prayerful treatment.

Send a comment to the editors
NEXT IN THIS ISSUE
Image and Inspiration
'They that trust in the ...' 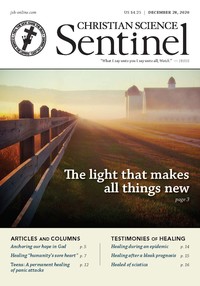