“The trouble is,” said my young, creative friend, “we love to argue ideas, but instead of coming together and agreeing (or respectfully disagreeing), we become more and more entrenched in our own corners, and it gets louder and louder until we explode!”

I understood what she meant. How often the exchange of ideas can quickly become just the opposite—the aggressive imposing of one’s opinions. We see plenty of this in political discussions between those with differing views. And many world leaders appear to be equally entrenched in their views, approaching their leadership from the less-than-divine standpoint of personal will and manipulation.

Send a comment to the editors
NEXT IN THIS ISSUE
Article
How can we feel safe? 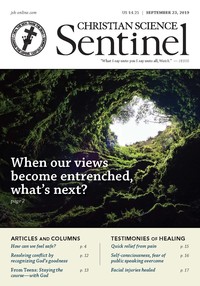