You will always exist

What does it mean to be immortal? That we are each immortal is an essential aspect of the teachings of Christian Science, and I confess I’ve struggled to understand the concept.

To be honest, I’ve often tried to reason it out with a certain brainy logic, intellectually accepting immortality as a sort of metaphysical goal—something I need to come to through a special set of human virtues. Then, goes my human reasoning, if I work hard enough I’ll finally get it right—like a math problem. But this kind of thinking always leads to the same incorrect conclusion: Immortality is for saints or sci-fi characters. Eternal life? Nice idea, but not for the average Joe. 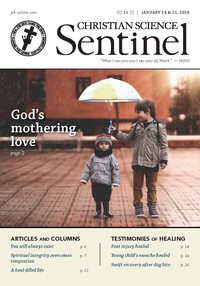