A peacemaker, not a stone-thrower

Chapter eight of the Gospel of John recounts an event that took place one day in a Jewish temple in Jerusalem. A group of men brought to Christ Jesus a woman who had been caught in the act of adultery. “Now Moses, in the law, commanded us that such should be stoned,” said the men, and then asked Jesus what he had to say. The gospel account indicates that the men were trying to entangle Jesus in Jewish legal arguments so they might be able to accuse him. Instead of responding to the men, Jesus stooped down and began writing on the ground with his finger. When the men continued to question him, he said, “He who is without sin among you, let him throw a stone at her first.” He then returned to writing on the ground. The account says that the men, “being convicted by their conscience, went out one by one, beginning with the oldest even to the last,” until Jesus was left alone with the woman. “He said to her, ‘Woman, where are those accusers of yours? Has no one condemned you?’ She said, ‘No one, Lord.’ And Jesus said to her, ‘Neither do I condemn you; go and sin no more’ ” (verses 5, 7, 9–11, New King James Version).

Why didn’t anyone throw the first stone? The narrative reports that they were all convicted by their consciences. Replacing self-righteousness by bringing out inherent humility and self-knowledge is certainly a foundational point of Jesus’ healing ministry, and a lesson that we could take from this story. But is there more that we can learn from it? 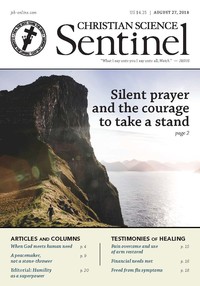