Many of us would agree these are partisan and polarizing times, whether it’s one government trying to influence another country’s citizens or various ways politicians try to get votes in their own country. I’ve always tried to avoid the fray of partisan politics but recently found myself getting drawn in, and I didn’t like it.

This came to light as I was thinking about a conversation I’d had with some friends about a certain politician running for reelection. I told them that my only criterion for her opponent was that the individual be “breathing,” such was my opposition to this candidate. At the time we all laughed, but when I thought about it later, I realized that this kind of mind-set only served to fuel a sense of polarization and frustration. 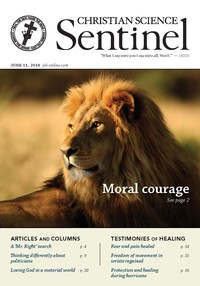