“Trials are proofs of God’s care.” The truth of this statement by Mary Baker Eddy in the Christian Science textbook, Science and Health with Key to the Scriptures (p. 66), has been borne out in my own experience, and although this is long overdue, I feel compelled to share several examples of how God’s care has been demonstrated in my life.

Shortly after my wife and I were married, we flew from the Midwestern United States to visit her parents in Southern California for a week in the spring. Several days after we arrived, I began to manifest symptoms of a severe allergic reaction. At first, they seemed merely an annoyance, and I didn’t pay them much heed. As the symptoms rapidly grew worse, however, I decided to turn to God in prayer, as I was used to doing when I had physical difficulties. But that night I found myself experiencing extreme difficulty breathing, and I became afraid that I was about to pass away. My wife called a Christian Science practitioner, an individual who is available to help others realize healing through prayer as taught in Christian Science. She explained the situation and then held the phone to my ear so the practitioner could talk to me. I no longer recall what he said to me, but I do recall feeling a sense of safety, of God’s love being present right then and there, and within seconds my throat loosened up, and I was able to take a breath. Within a few more moments, I was breathing normally, and by late the following morning all symptoms had entirely vanished. 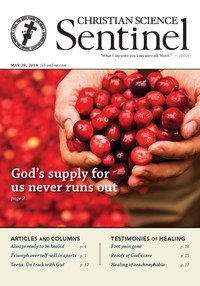