Seeking and finding true worth

Christ Jesus’ disciples continued the healing ministry he had established and taught them, even after he was gone from them. One of my favorite accounts of this continued ministry is of Peter and John entering into a temple to pray and being stopped by a lame man asking for alms, which could include any kind of handout, such as money, food, or clothing (see Acts 3:1–8). Peter’s response is: “Silver and gold have I none; but such as I have give I thee: In the name of Jesus Christ of Nazareth rise up and walk.” Immediately the man’s feet and ankle bones are strengthened. He is able to walk—for the first time in his life—and he enters with the disciples into the temple, all the while giving God praise for his healing.

The basis of this man’s desire for money or material goods was probably no different from a generally accepted view today—that these things are needed to sustain life. In this man’s case, whatever passersby would give him would probably have sustained him for a day or so; but this wasn’t a permanent solution, because he would always need more.

Send a comment to the editors
NEXT IN THIS ISSUE
Article
No disability, only ability, in God’s creation 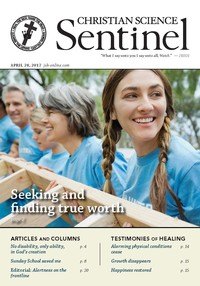