Originally written in Portuguese, this first appeared in the July 2016 Portuguese, Spanish, French, and German editions of The Herald of Christian Science.

In August 2011, I began attending a college in the United States and started playing on its soccer team. I hadn’t played or exercised at all in six years, and after about four days of training, I started to feel a sharp pain on the top parts of each of my feet.

We had two training sessions a day—one in the morning and one in the afternoon. One day, after I trained in the morning, the pain was so acute that I could barely walk. I got a bit discouraged and thought seriously about not playing soccer for the school and instead focusing only on studying.

Send a comment to the editors
NEXT IN THIS ISSUE
Bible Lens
Bible Lens—July 25–31, 2016 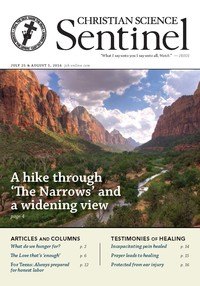