Originally written in Spanish, this first appeared in the June 2016 Portuguese, Spanish, French, and German editions of The Herald of Christian Science.

For many years, I was a lonely person, and, in spite of several achievements and doing well at my work, I wasn’t satisfied with my life. It seemed as if there was something that didn’t allow me to be happy. Then one day, I began to pray about it and to ponder deeply what was happening to me, as if I was talking with God, and the question came to me, “What is sadness?” The answer didn’t take long. Almost instantaneously the thought came: “Unsatisfied human will.”

For me that answer was like looking in the face of error (error being mistaken beliefs about who we are and who God is).

Send a comment to the editors
NEXT IN THIS ISSUE
Image and Inspiration
'Thy radiance is so pure, so free' 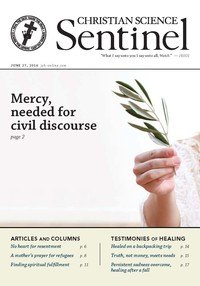