My mom says she remembers well the Sunday morning when she was out of town and my dad called to tell her I had decided I wasn’t going to church anymore. She said to him, “You mean, ever?” I was 15, immersed in a secular culture at school and also influenced by extended family members who were less than friendly toward Christian Science—which I had been raised in—and so I had decided I was “against” organized religion. I had even written a thoughtful essay in school that explored and explained my views, and on that Sunday morning had handed the essay to my dad. My parents perceived that I had made my decision thoughtfully, not rebelliously, and so allowed me to make my decision on attending church independently from that point forward.

My youthful journey of exploring and determining what I believed in spiritually took twists and turns along the way. There were years in which I felt that I didn’t at all believe in God or any higher power and had no interest in spirituality. There were other years in which I yearned to know more about life and truth, and so began to read widely about various religions and spiritual beliefs. Occasionally, I would attend church services of different denominations, including Christian Science.

Send a comment to the editors
NEXT IN THIS ISSUE
Article
‘How are you?’ 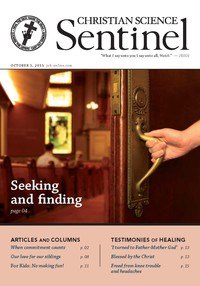