Don't fall for the ads

Back in college, my friend, who was studying to become a medical nurse, called me with a complaint. Over the course of her studies, she had become convinced that she had the symptoms of every disease she studied—including the diseases that only men could get! We laughed about it, but later, when I became a Christian Scientist, I would often think back to that example of the power of suggestion.

Today, the power of suggestion through advertising has broken new ground. Not only do drug companies produce television ads that bombard viewers with a myriad new drugs for sale, but the selling of new, fabricated diseases to go along with these drugs has become central to the multi-trillion dollar, worldwide drug industry. 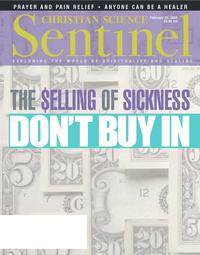