Facing the fear of SARS

The nightly newscast said that fear was spreading faster than the disease itself. Government and health officials all over the world are warning about SARS (severe acute respiratory syndrome) and offering advice on how to fight it. "For SARS, fear is the central pathogen ..." said Marc Siegel, associate professor of medicine at New York University (The Boston Globe, Apr. 5).

This echoes what I've been learning about the importance of getting rid of fear in my own life when facing physical ailments, no matter how large or small they may be. Mary Baker Eddy, who discovered Christian Science, wrote: "The cause of all so-called disease is mental, a mortal fear, a mistaken belief or conviction of the necessity and power of ill-health ..." (Science and Health with Key to the Scriptures, p. 377). 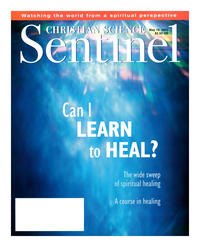