My introduction to Christian Science was through healing

My introduction to Christian Science was through healing. As a youth and young adult I had frequent sore throats. One summer the problem became chronic. I was being treated by a doctor two and three times a week, and was at times too ill to work. A colleague whom I knew to be a Christian Scientist, said to me, "Your suffering is all unnecessary." I asked him what he would suggest. He suggested that I talk to a Christian Science practitioner and arranged for me to do so. My appointment with the practitioner was on Tuesday. At the close of the interview, he suggested that I get a copy of Science and Health and read the first chapter, "Prayer," several times to be sure I understood the spiritual nature of prayer before proceeding with the rest of the book. And he said he would continue to pray.

I went home and did as he suggested. By the following Saturday the sore throat was healed. About a week later it returned, but it was not as severe as before. Upon calling the practitioner, I was told that it was impossible for me to have a sore throat. At that time I did not understand the truth of that statement, though I later came to see that the perfection of God's creation can't possibly include illness. The healing was quick and permanent. There have been no more sore throats in the past forty years.

Send a comment to the editors
NEXT IN THIS ISSUE
Testimony of Healing
I was leaving my bedroom during the month of January 1995... 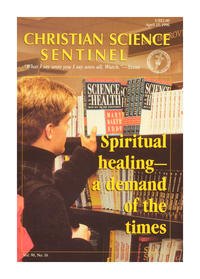