When I heard about Christian Science, I was in Berlin suffering...

When I heard about Christian Science, I was in Berlin suffering from the last stages of tuberculosis of the lungs. Several doctors said that I had only a few weeks to live.

One day my mother told me that she had heard about a person who performed miracles, claiming that any disease could be healed through prayer alone. Two days later this woman, who turned out to be a Christian Science practitioner, was invited to our home. I was impressed by her luminous expression and her authoritative words. At first Science seemed impractical to me, but little by little I became convinced of its truth by reading the textbook, Science and Health by Mrs. Eddy. Its teachings made sense to me, and I had my first healing through the practitioner's work. Later, as I studied the textbook in depth, I was freed from many longstanding material beliefs and a fear of death. 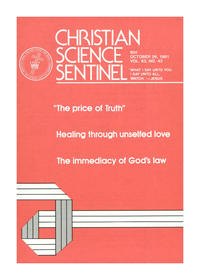