As a young girl I suffered regularly from nosebleeds which would...

As a young girl I suffered regularly from nosebleeds which would leave me incapacitated for hours, fearing that any movement would worsen the bleeding. One day when I was a sophomore in high school I was about to enter my eight o'clock class when my nose began to bleed quite heavily, and a teacher insisted that I see the school nurse. I went to see the nurse and immediately informed her that I was a Christian Scientist. Then I asked her for help in calling a Christian Science practitioner. The practitioner began to prayerfully work for me.

The bleeding did not lessen immediately and after some time the nurse was frightened and wanted me to be taken to a hospital, since she no longer wanted responsibility for what happened. I asked if I could again call the practitioner, which I did, and very shortly the problem let up enough so that I was able to go home.

Send a comment to the editors
NEXT IN THIS ISSUE
Testimony of Healing
Once on a day off from work I found I couldn't walk on one... 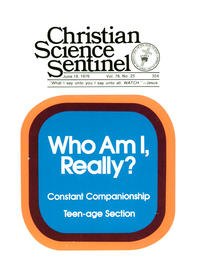