The Founding of Christian Science

The one hundredth anniversary of the birth of Mary Baker Eddy, the Discoverer and Founder of Christian Science, is a fitting occasion for Christian Scientists, and the world in general, to consider anew what this century of spiritual achievement has meant to humanity. A century may be thought of as a stately division of earthly time or as a type of completeness. The events of any period are important only in proportion as they turn attention to Principle and illustrate how earthliness must give way to the completeness of Spirit and its idea. The human history that deserves recording is that which marks the subsidence of suppositional evil because of the unfoldment of Truth. What Mrs. Eddy thought of personal history, we find explained on page 21 of "Retrospection and Introspection," where we read: "It is well to know, dear reader, that our material, mortal history is but the record of dreams, not of man's real existence, and the dream has no place in the Science of being. It is 'as a tale that is told,' and 'as the shadow when it declineth.' The heavently intent of earth's shadows is to chasten the affections, to rebuke human consciousness and turn it gladly from a material, false sense of life and happiness, to spiritual joy and true estimate of being."

Because Mrs. Eddy herself, at what seemed an extremity of human need, in 1866, the date of the discovery of Christian Science, turned resolutely and gladly to infinite Mind as all the power there is, she was able thereafter securely to found Christian Science as the metaphysician truth which is to compass the complete destruction of sin, disease, and death through the replacement of all false belief with the spiritual idea manifesting Principle. In the passage just quoted, she continues: "The awakening from a false sense of life, substance, and mind in matter, is as yet imperfect; but for those lucid and enduring lessons of Love which tend to this result, I bless God." The way for the perfect awakening is open for all to take advantage of because of what Mrs. Eddy has done. 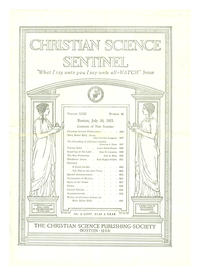