"Casting away his garment"

The story of the healing of blind Bartimæus recorded in the gospel of Mark cannot fail to interest the student of Christian Science to-day, for it illustrates the mental qualities that helped Bartimæus to overcome the difficulties that beset him when he appealed to Jesus for healing. The restoration of sight to this man who sat by the wayside begging is an object lesson to all those who are seeking to gain a clearer understanding of the truth that heals the sick. In the narrative in the New Testament, it will be noted that first of all Bartimæus began to cry out to Jesus to have mercy on him, and he refused at the bidding of others to cease his supplications. The fact that Bartimæus appealed to Jesus shows that his attitude of mind was not only humble, but that he was looking for good, and therefore ready to make use of all the good that came to him. When Jesus stopped and commanded him to be called, those who would have stilled his cries now sought to cheer and encourage him. Bartimæus, however, needed no encouragement, and, "casting away his garment," he hastened to obey the Master's command. The result of his prompt and eager obedience is well known, for we are told that "immediately he received his sight." In that brief space of time after Jesus called him, it is evident that Bartimæus willingly and joyfully surrendered and cast from him his old beliefs and fears, and so prepared himself for the instantaneous healing which took place.

Those who are seeking healing from Christian Science are not always awake to the necessity of casting away their garments to enable them to gain the blessings they are seeking, and they may perhaps be hugging these garments closer to them, fearing they will lose something of value if called upon to part with them. When the light of Christian Science is turned upon them, however, these garments are seen to be nothing but rags and tatters, of no value at all, but only a hindrance to the student's progress. For these garments that must be cast off, that have been trammeling the limbs of the seeker for Truth, are nothing more than false beliefs and fears, erroneous thoughts and materiality, which every one of us will need to cast aside in order to gain our real sight, or spiritual perception. 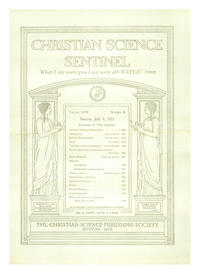