On Telling the Truth

IT was a great spiritual insight which led the Quakers to insist upon a strict adherence to the truth. Unfortunately, it was an inspiration unsupported by metaphysical understanding, with the result that its effects were largely frittered away in objections to the use of "we" for "I" or the social amenities implied in such a phrase as "Good day." At the same time the instinct which guided George Fox in his insistence on absolute veracity was divine. The Roman was as sure of this as the Hebrew who wrote Esdras, and the conclusion has come down to our own time in a whole bundle of proverbs. Yet, in spite of it all, absolute truthfulness was regarded by the ancients, and has been regarded ever since, rather as a counsel of perfection than as a workaday possibility. Not until Christ Jesus came preaching on the Jordan was the metaphysical aspect of the matter ever put fairly and squarely before the people, and even then, in the dark centuries which followed, human philosophy once more accepted the ideal of the counsel of perfection, nor was it until Mrs. Eddy gave Science and Health to the world that the full scientific significance of Christ Jesus' teaching was made plain, once more, to humanity.

Christ Jesus defined what may be termed both the absolute and the negative side of the matter quite clearly in this teaching. To those Jews who would have been his followers, he said, in the temple, "If ye continue in my word, then are ye my disciples indeed; and ye shall know the truth, and the truth shall make you free." The metaphysical meaning of this is, of course, perfectly clear. The truth, Jesus was saying, to his audience, is absolute. If you abide in it mentally, everything that is untrue, and so out of Principle, must be excluded from your consciousness. This will make you free from the influence of evil in the exact degree in which you maintain your position, and so harmony will be gradually substituted for inharmony in your lives. 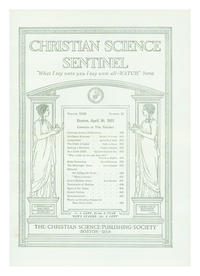