I wish to express my gratitude for all the joy and happiness...

I wish to express my gratitude for all the joy and happiness which have come into my life during the past six years through the study of Christian Science. I am especially grateful for the help it was to me during four years spent in the Australian army, and for the wonderful protection whilst fighting in France. Of many demonstrations whilst in the front line trenches one of instantaneous healing of fear stands out clearly. It was after many days of intense fighting, without any sleep, and with very little food, we were called upon to go over the top for another counter attack. It just seemed that the end of my endurance had been reached, and that I could not go on any further, the fear of death was so great. I saw that the other men were in the same condition too, and quickly realized that such thoughts were wrong. For a few minutes I quietly realized the truth as we are taught by Mrs. Eddy: that man in the image and likeness of God is spiritual and perfect and has no life apart from God. The unreality of all the conditions surrounding me was revealed in a flash, and all sense of fear of death left me, and I was able to go through a bayonet attack with absolute joy in my heart. This spiritual uplift was wonderful and remained with me for many hours, and during the progress of the battle, although conditions seemed to become worse, they did not affect me, and the men who were with me were also relieved from fear.

Whilst in the line during the winter of 1917 I was attacked with trench fever, and for three days was hardly able to move. Things were fairly quiet, so I was not evacuated. I tried to realize the truth as well as I could, but did not seem to make any headway. On the third day I received word that I had to go behind the line for a month's rest, along with some other men. We started the next day and had to walk three miles on broken duck boards before reaching a road, and by that time I had no strength left and sat down on the roadside, seemingly done for, with a ten-mile walk in front of me and full equipment to be carried. After resting for a time I started, the other men having left me with the cheering assurance that at the rate I was going it would take me days to get there. Feeling ill, and absolutely deserted in a devastated area, I did my best to hang on to the truth. To my joy a limber came along and the man gave me a lift to within two miles of my destination, and from there I was able to get a further life. I was in a dugout with twelve other men, and instead of its being a rest it was the reverse, as the men spent every available minute drinking. By getting up at 6 a.m. I managed to get Science and Health and read for an hour each day. Day after day passed and there seemed to be little or no improvement in my own health or my surroundings, but at the end of a fortnight I suddenly became aware that I was perfectly well again, also my companions were healed of the drinking, and the remaining fortnight was spent happily. For these proofs of the healing and redemptive power of Christian Science, for all that Mrs. Eddy has done for mankind through her writings, and for the periodicals I am deeply grateful.

Send a comment to the editors
NEXT IN THIS ISSUE
Testimony of Healing
For a long time I have felt I should sent a testimony to... 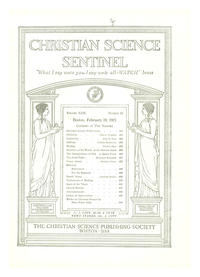