Each mortal finds himself over and over again listening to the voice of the serpent, which whispers suggestions that are sometimes openly evil, more often, however, masquerading as good,—suggestions of doing "evil that good may come," of enmity on the part of those with whom one would be friendly. These present themselves in varying ways to the thought, wearing a garment of reliability in order that they may gain ready admittance to the unwary—and often to those who deem themselves wise—and find lodgment there until at last the truth is learned and what before was entertained as truth is found to be but lies, nothingness, nonentity. Whence come these suggestions? Where did evil come from in the beginning? The answer to these troublesome questions can only be that evil, being a belief in the opposite of good, never came from Truth, and is a lie. When in our sleeping dreams we have passed through strange experiences and seem to have conversed with and listened to what was but an apparition, upon our awakening do we concern ourselves with the query as to where it came from? Do we not know without question that it was without origin, and thereby neutralize or destroy its influence?

In the second chapter of the great allegory of creation we are told that Adam fell into a "deep sleep," but nowhere are we told that he awakened from this sleep. In the first dream of which we have any record, to Adam and the woman Eve who shared his dream, evil appeared in the guise of a serpent stealing furtively into their happy, harmonious sense of existence, beguiling them into disobedience to the divine command, with promises of wisdom equal to divinity: "Ye shall be as gods, knowing good and evil." The voice of the serpent and the evil suggestions of to-day are all a part of the waking dream of the ages which began with the dream of Adam and Eve. As a result of this first disobedience, mortal man still dreams of life in matter, in a material body,—and his chief concern is how this material body shall be clothed, fed, housed, and amused. He dreams of happiness, when his body shall be satisfied with that which can be provided for its comfort: but he is bound to a cruel taskmaster which demands more and more, and he falls an easy prey to the suggestion of imposing suffering upon himself and others that prosperity may be enjoyed later on,—this suggestion finding expression in wars, strikes, and crimes of various characters. 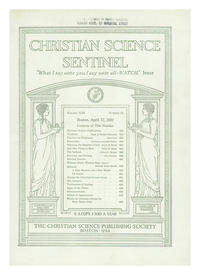