I have so much to thank Christian Science for that I am...

I have so much to thank Christian Science for that I am happy to give my testimony, in the hope that my experience may offer encouragement to others. I first became interested in 1902, through an instantaneous healing in my family, ailments of thirty years' standing, that had exhausted the skill of eminent physicians, both in this country and abroad, having quickly disappeared. I soon began reading "Science and Health with Key to the Scriptures" by Mrs. Eddy, not thinking that I, too, needed physical healing. I was a very nervous woman, and had been for so long a time that I had accepted the condition as perfectly natural. I had suffered from severe headaches, which lasted for many days at a time, and thought that I could not get relief except by using a certain drug, which the doctor had told me affected my heart. I was also subject to bowel trouble, and had been for years, also to frequent colds that lasted for weeks at a time. In a very short time I realized that I had been freed from all these difficulties, solely through the spiritual understanding I had gained in reading the textbook, and it was not long before I found that I could apply Christian Science whenever occasion demanded.

Since then I have had many beautiful proofs of the healing and protecting power of divine Love, as demonstrated in Christian Science. One day, while riding in a street car and turning a sharp corner, I lost my balance and plunged forward against the heavy door frame, and the door closed on four fingers with great force. Two of the fingers seemed pretty badly injured. As soon as I reached my destination I telephoned to a practitioner for help, and the suffering ceased in a very short time. I am especially happy to be able to say that my nails are perfect, although some friends predicted that they would be deformed. On another occasion I held both hands under a hot water faucet, thinking it was the cold water faucet. The water was extremely hot, and the burn seemed severe, but through the application of Christian Science the pain disappeared in a few minutes, and there was not even a sign of redness left. About ten years ago I had a very aggravated case of bronchitis, accompanied by a very severe cough which had lasted for about a year. I am happy to say that one day I suddenly realized that it had passed into its native nothingness. I have not taken any kind of medicine during the last eighteen years, and have never been in more vigorous health than throughout this period.

Send a comment to the editors
NEXT IN THIS ISSUE
Testimony of Healing
In thinking over the many blessings received through... 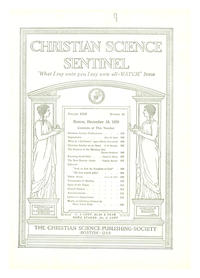