In a recent issue, under the heading of "The Church and Faith-healing,"...

In a recent issue, under the heading of "The Church and Faith-healing," there is a reference to Christian Science to which I am going to ask you to let me take exception. It is the statement that "Christian Scientists have found their system of treatment by prayer and suggestion only applicable to a certain class of disease." Now, first of all, Christian Science actually eschews suggestion. Suggestion, it points out, is the claim that one human mind can act and control another human mind. If this were the case, it would make the stronger mind able to dictate either what it chooses to call good or evil to the weaker human mind. This, indeed, is the claim made for suggestion.

Fortunately, however, when faced by Christian Science, mental suggestion always breaks down, and the fact is demonstrated that there is no actual power in it. As a matter of fact, suggestion is just what has been known throughout the dark ages of the world's history as magic or necromancy, or any mental dealing of that nature. In the time of Jesus it was called exorcism, and when the Pharisees wished to dispose of Jesus' healing they tried to describe it as exorcism, or as they put it, casting out devils by Beelzebub. In his reply, Jesus once and for all crushed the claim of mental suggestion to be regarded as Christian. A house, he declared, divided against itself could not stand. At the same time, he declared that if he cast out devils through the Spirit of God, then the kingdom of God was come among men.

Send a comment to the editors
NEXT IN THIS ISSUE
Article
The time when religious convictions and beliefs were taken... 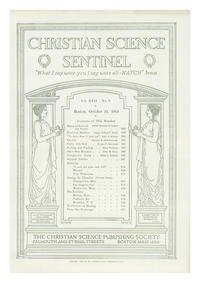