New York city has just ended its five years of the probation system for first offenders in the criminal courts. Since it was introduced, the proportion of criminals who, having committed one offense commit a second, has been reduced by ninety per cent. Before probation forty-six per cent committed a second offense. After release without imprisonment on probation only 5.4 per cent have come up for trial a second time. Of 6,579 children placed on probation in the Children's Court in five years, from 1902 to 1907, 5,543 have been put on the right road without ever going to an institution at all or having any confinement but the watchful care of a probation officer. In the case of adults there were 2,231 offenders out of 4,896 whom the probation officers, after investigation, recommended should be paroled. Out of these 2,231 sentenced criminals paroled without imprisonment, only six per cent violated their parole.

The Senate Committee on Interstate Commerce is in receipt of a letter from the Interstate Commerce Commission advocating an appropriation of three million dollars with which to make a thorough physical valuation of the railroad properties of the country. The Commission estimates that this can be made in three years; and it especially suggests that the examination, if authorized, shall not be based upon considerations of what would be "fair and reasonable" within the technical meaning of those words as they are found in existing law. The Commission desires an exact valuation of physical properties, leaving values relative to purchase, good will, and other appurtenances of a going concern to be determined later as occasion may arise. 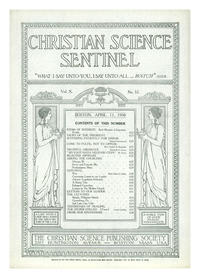