The Practicability of Christian Science

No one disputes the fact that the whole world has need of healing. Not a single inhabitant thereof can truthfully claim to be entirely free from ills of some sort, either physical or moral. The question is, How shall these ills be healed? It is conceded by all right thinking people that Jesus the Christ was the greatest physician the world has ever known. Why, then has there been so little study given to his teaching respecting disease by those who have appointed themselves administrators of the art of healing? Do we not find, two thousands years after the Saviour's departure from the flesh, the same blind search as prevailed before his coming, for virtue in some material substance "of the earth, earthy" wherewith to heal the sick and bind up the broken-hearted? On the basis of common-sense, Christian Science appeals to all who think. It points out that disease can be exterminated only by attacking the cause, and it lays bare the fact that all causation must of necessity be found in the mental realm.

While Christian Science exhibits a marked departure from the beliefs of the hour, in its process of dealing with disease, it cannot be said that in a single degree this departure is more marked than was the teaching of our Saviour with respect to the popular theories of his day. Through our apprehension of Christian Science we learn that sickness is invariably the product of sin,—using this term in its broadest sense as including, in addition to wilful transgression, all those myriad forms of unconscious infringement upon righteousness which go to make up human experience. It follows, then, that only through the continual exercise of our mental faculties toward the complete elmination of all sin, do we control the source of disease or handle it in its incipiency. This task is not so arduous as would appear at first glance, when we understand the Science or practical truth which underlies the process employed; for the assurance of positive results invariably lightens our burden and inspires us with fresh courage for the fray. 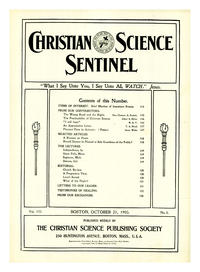