Christian Science has no quarrel with those who may...

Christian Science has no quarrel with those who may differ with it; but, on the contrary, it teaches its adherents to live meekly and follow in the footsteps of Jesus Christ, the Wayshower. It teaches us to trust absolutely in God,—the omnipotent, omnipresent, omniscient Father of us all,—and it is being proven daily by thousands of intelligent men and women that this trust in God brings to them results in health, happiness, and peace far beyond anything that the world has to bestow. Surely such fruits as these are blessings for which all men are seeking to-day. Christian Science requires of its disciples purity of thought and action, and sets before them the Golden Rule, the doing unto others as they would that others should do unto them, and it admonishes them to observe this rule continually; always to overcome evil with good.

Christian Science is not a "fad." Neither can it be considered as being outside of other religions in its teachings as to the good. A point, however, of difference between them is that Christian Science holds it to be as necessary to obey the commands of Christ Jesus to heal the sick, and in the same way that he did,—by reliance upon Divine power only,—as it is to preach the gospel. Jesus never separated the two, and there is no authority in his teachings for their separation. It is largely because Christian Science enables its students to demonstrate this healing power of Truth that it has had such phenomenal growth. It is pre-eminently a practical religion. It gives to man a larger and a better understanding of the Principle of life, which Jesus taught and demonstrated; it would have man earnestly seek after spirituality, and as he finds it he is able to apply his understanding of it to the problems of human existence.

Send a comment to the editors
NEXT IN THIS ISSUE
Article
Christian Science does not admit that God is the... 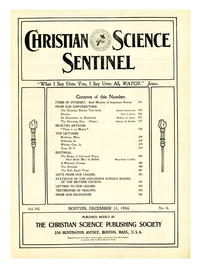