A Summer Experience and its Lessons

One morning I was working in my garden and had a handkerchief about my neck in place of a collar. While handling some of the vines I suddenly, and without warning, felt a brisk buzzing in the kerchief's folds. From my boyhood memories I recognized an old acquaintance with some very penetrating peculiarities, and for a few seconds there was quite a vigorous and instinctive demonstration to free his majesty of the yellow and brown coat from the inclosing cloth. During this effort he made a move, quite natural to him, according to mortal belief, and which for an instant I felt very keenly. He was soon liberated, however, and went away, glad, apparently, as I, at the termination of the episode. With a denial of the power of poison to touch my real being, the discomfort ceased, and I proceeded with my work until breakfast was called.

When in the house I thoughtlessly put up my hand to feel what was there any way, and immediately, on thus turning my thought to it, the pain began again with the old-fashioned smart and irritation. I at once returned to my denial, and the pain ceased as quickly as it had begun. This proved the truth of the scientific teaching that pain is a thing of mortal mind, and that mortals can have it if they want it and dispose of it if they dare. After this, I had not the least sensation or inconvenience from the sting, but I did get a pointed hint which set me to thinking along scientific lines. 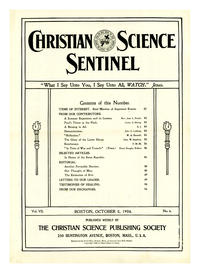