The Ideal and its Realization

It is nineteen hundred years since the Christian era dawned. The Christ appeared as man upon the world's arena, reversing all human laws, ways, and means, establishing a new code for human government, teaching it in the clearest, most unmistakable language, and illustrating it in his own life and works. That code was Love—unselfish, self-sacrificing Love.

So far above the apprehension of the majority of his hearers was it, that it aroused the bitterest antagonism, not only in the world secular, but the religious authority of that day, and its following went far beyond the world—so-called—in the condemnation of the new teacher and his strange, and to them blasphemous, teaching. 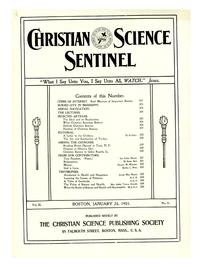