Rev. William P. McKenzie, C.S.B., of Cambridge, Mass., member of the International Board of Lectureship of the Mother Church of Christian Science in Boston, Mass., says the Eastport Sentinel of August 2, delivered, as advertised last week, a fine lecture at the Opera House on Monday evening to a comfortably filled house. The speaker was introduced by a former townsman, Mr. Carol Norton, C.S.D., also a member of the same Board of Lectureship. Professor McKenzie held the attention of the audience while he unfolded in a lucid manner the religion, philosophy, and Christian healing of Christian Science. The stage was prettily decorated with evergreens, palms, and cut flowers. Mr. Norton's introductory remarks were as follows:—

Ladies and Gentlemen, Fellow-citizens:—We have assembled to-night to hear a lecture entitled, "The Truth Concerning Christian Science." I think we are all aware of the fact that this subject is at the present time engaging the sober thought of Christendom. This lecture is given in the regular course of the educational work of this great movement. The lectures are designed to put this subject before the people in a simple and direct way. Life at best is deep. Life on the one hand is filled with mystery, and on the other with certain self-evident truths. The great question of Pilate, after all, peculiar as we have always thought it, but still uppermost in every breast, is What is Truth? We are thinking beings. We live in a world of thought, and advancement must be progressive. Again, we look about us in the world of existence and with one voice we admit that if sin were removed, if we could conceive of an understanding of God and of religion that would eliminate pain, wasting disease, and misery, and if through a spiritual mastery of the teachings of the Founder of the Christian religion we could gain a practical and every-day understanding of the significance of the kingdom of Heaven within, then I say that we would be willing to hear the Truth, to get new light on old truths, and to embrace as a unit the one great motive-power of this religion—the return to the demonstrable Truth of Christianity, not according to the schools, not in harmony with scholasticism, but Christianity according to Christ, with its power of moral regeneration, spiritual or mental transformation, the healing of physical disease, and step by step the establishment on this earth of the kingdom of righteousness and of God. 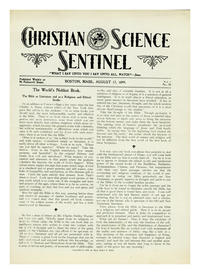