In the Mire of Ignorance

Mr. Charles A. Crane, pastor of the Saratoga St. M. E. Church, East Boston, in a letter recently written and published, undertakes to define his sense of mind-reading. Unfortunately for him, he has not the slightest comprehension of the subject he assumes to elucidate. Had he understood his subject he would have known that there is a wide distinction between a claim that a metaphysician, or spiritual discerner, can read the universal mortal mind, and the claim that one being specially attacked by the thought of a mental malpractitioner can know mentally just what the mental operator is declaring; and he would also have known that the Rev. Mary Baker Eddy referred to the mental malpractitioner alone in speaking of the spiritual sense which she possessed, and not to the mortal mind in general. Those familiar with the methods of the malpractitioner can readily understand the distinction here referred to. Those who know nothing of mortal mind, in this sense, are utterly incompetent to understand or interpret the language of a metaphysician spoken in such connection, and only betray their ignorance when they assume to speak.

Therefore we leave Mr. Crane where we found him,—in the mire of his own ignorance and folly. 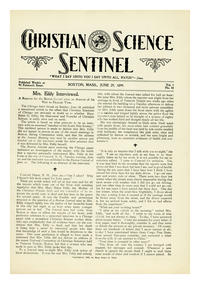