A MILLIONAIRE SPEAKS THE TRUTH

Tom Johnson —if you wish to hear him use language, call him Thomas—is a unique character among millionaires. He is a great money-maker and a man of advanced views—an iron manufacturer and a radical free trader, the owner of no end of street car lines and city property, and "unearned increment," and a pronounced single-taxer. Johnson is a man who sees things as they are, and who is frank to tell how he sees them. Recently he delivered himself of this statement:—

"I don't believe in charity. It is merely another drink to a shaky man. What the world needs is justice and not benevolence. I shall continue to decline to give checks to eleemosynary institutions, and I shall leave no money to build churches and found libraries. My family will be well provided for, but the rest of my fortune, after my death as well as before, will be spent in trying to teach people how to stop me, and men like me, from robbing them. So long as it is permitted to any man to take what doesn't belong to him through monopolizing nature's resources and the private ownership of public utilities, plenty of men of my kind will always be ready to jump in and do the stealing. My mission is to show the people how it is done, to take what they are stupid enough to let me take, and to show them how they can put an end to the system which enriches me and impoverishes them,"—Ex.

Send a comment to the editors
NEXT IN THIS ISSUE
Editorial
Colonel Ingersoll, in his recent lecture in Boston on... 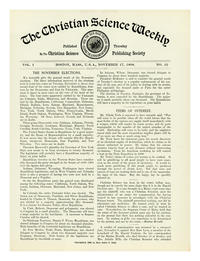