The Christ is always here to help

Even in dire circumstances, Christ, our Savior, is always present to bring healing to all who turn to it.

The question comes up from time to time, “Why don’t Christian Scientists just see a doctor or take medication when they need healing?” In my case the answer is simple. I have more faith in God and His healing power, as demonstrated by Christ Jesus, than in any other means.

Jesus was the man who most epitomized Christ, which Mary Baker Eddy defines as “the divine manifestation of God, which comes to the flesh to destroy incarnate error” (Science and Health with Key to the Scriptures, p. 583). Spiritual healing, as Jesus practiced it, is still alive and active in the world today through the under-
standing of Christian Science.

I have come to rely on spiritual healing because I’ve found it most effective. Even in dire circumstances, Christ, our Savior, is always present to bring healing to all who turn to it.

I witnessed an example of this when I was called to pick up my sister at a friend’s apartment. Because of a heartrending relationship, she had lost self-esteem and become deeply depressed. She had also been drinking for some years to medicate herself for the emotional pain and had become dependent on alcohol. At the time of the call to come get her, she appeared to be having a complete mental collapse.

As my sister learned more about God and her relationship to Him, adjustments began to take place in her life.

When I got my sister home, I offered to help in any way I could. Since she was not a student of Christian Science, I first offered to take her to a medical doctor or a psychiatrist for help. I also suggested that I could reach out to Alcoholics Anonymous if that were her choice. And finally, I also offered to call a Christian Science practitioner to pray for her.

She wouldn’t respond. For three days she lay with her face pressed into the back of a couch, not eating or speaking and rarely moving. With no directive from her, I asked God to show me how I could help her. I also asked Him to help me see her as He created her, in His own image, completely pure, happy, and free—not as the broken, pitiful sufferer she appeared to be. I continued to offer food and tried to comfort her, but to no avail.

Finally, on the third day she asked in the tiniest voice, “Is it too late to call a practitioner?” I was overjoyed! We had both been raised in Christian Science, and while she had never outwardly embraced its teachings, I saw this request as a spark of the Christ, her true Godlike nature, within her.

I made a call to my Christian Science teacher, but to my dismay he was out of the country, and it would be 24 hours before I could reach him. I hung up, feeling frustrated that my sister had finally reached out for help, and now it wasn’t available. But right on the heels of this thought came a clear message: “The Christ is always available!”

I joyfully embraced this truth. A moment later I heard my sister say, “What’s for breakfast?” She was sitting up and had become animated and communicative. The next day we went to church together and then to a friend’s house for lunch. For a long time, my sister had looked spent and haggard, but now everyone commented on how beautiful she was. And it was true—she had a lovely glow about her.

Next, she asked for and began voraciously reading copies of the Sentinel. She pored over them for weeks. As she learned more about God and her relationship to Him, adjustments began to take place in her life. Her self-esteem became more spiritually grounded as she grasped her true selfhood—Godlike, secure, and free. Soon, the unhealthy relationship she had been in ended.

Several months later, she met a wonderful, hardworking young man. He proposed a few weeks later, and they were married in less than a year. They raised three beautiful daughters together and are now enjoying their grandchildren. That was 39 years ago, and my sister has never had another drink.

Her self-esteem became more spiritually grounded as she grasped her true selfhood—Godlike, secure, and free.

This was such a lovely illustration of the power of Christ, Truth, to heal the heart and bring freedom from addiction. But I wondered how the healing had come about, so I prayed to better understand how the Christ had been such an instantaneous help.

Later that year, at the annual meeting of my Christian Science students’ association, I received an answer. My teacher explained that when we call a practitioner for help, we are not really calling on a person but are reaching out for the power of God to heal and save. In the event that the practitioner is not available, we can still trust that the ever-present Christ, “the divine message from God to men, speaking to the human consciousness” (Science and Health, p. 332) will answer the call.

My teacher was certain that even while he was away, any patients calling him would still be helped, and he had kept records of the times this had happened in his own practice. With my sister’s permission I gratefully wrote to him and shared her healing so he could include it in his records.

Experiencing God’s healing power, as in this case, has given me confidence to trust Him more and more with all my needs, big or small As the Bible says, “Sanctify the Lord God in your hearts: and be ready always to give an answer to every man that asketh you a reason of the hope that is in you” (I Peter 3:15). I’m deeply grateful for this healing, which is just one of my many reasons for hope. 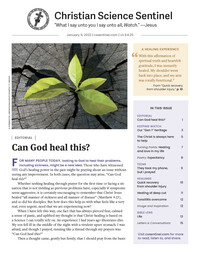