At home one evening, I took a sharp turn into our laundry room and tripped over a cat litter box that wasn’t in its usual place. I fell forward, and my head smashed into the sharp edge of the sink.

There was a great deal of blood from the wound, and my husband rushed over to help me. He was understandably worried and said that the gash on my forehead would certainly need stitches and that he should take me to the emergency room. I told him I understood his concern, but assured him that God was caring for me and that I would pray. Having seen the effectiveness of prayer on other occasions, he supported my desire to pray and rely only on God for healing.

What immediately came to thought was a Bible passage that I have been aware of since I was young: “When I passed by you and saw you struggling in your own blood, I said to you, . . . ‘Live!’ Yes, I said to you, . . . ‘Live!’ ” (Ezekiel 16:6, New King James Version). I was familiar with this passage because when my mom was hemorrhaging heavily during her pregnancy with my younger brother, she had prayed with it. My family had been new to Christian Science at the time, and my mom’s doctor’s office was a long drive from our tiny town. I remember that by the time my dad got her to the doctor’s office, she was completely healed, and there were no problems when my baby brother was born.

That was years ago, of course, but those same words from Ezekiel were encouraging to me in the present moment. The bleeding from the gash stopped immediately, and I felt no pain.

This was one of many truths that raised my thought and heart above the suggestion that there had been an accident or event that had the power to harm me.

As I continued praying that evening, I was grateful that my trust in God as Love helped me be free of pain and fear. I love this passage that came to thought from Romans: “I am persuaded, that neither death, nor life, nor angels, nor principalities, nor powers, nor things present, nor things to come, nor height, nor depth, nor any other creature, shall be able to separate us from the love of God, which is in Christ Jesus our Lord” (8:38, 39). I don’t remember feeling anything but God’s omnipresence and love.

The next day, a friend remarked that the cut would take a long time to heal and could very well leave a scar. I assured her that I was praying and that neither had to be the case.

During the next couple of days, my prayers centered on acknowledging persistently that I was God’s image and likeness and reflected God’s perfection. Each morning I felt the spiritual truths in that week’s Bible Lesson from the Christian Science Quarterly uplift my thought. Following this study and prayer, I don’t recall feeling any pain or even thinking of the event or having a sense of having been injured.

On the fifth day, as I was washing my face, I noticed that there was no mark on my forehead. All trace of the injury had disappeared. The next time I saw my friend, she was inspired by how quickly the wound had healed. She joyfully agreed to confirm that the healing was complete and that when she saw me again there was no scar.

The Bible assures us in I John 4:8 that “God is love,” and this healing was solid proof of this fact to me.

Send a comment to the editors
NEXT IN THIS ISSUE
Testimony of Healing
Burden released, stiff neck healed 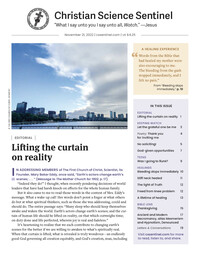