A prayer for unity

I’ve seen deep divisions dissolve through prayer, so I know healing is possible.

I joined the United States military toward the end of the Cold War. At that time the country was generally united against the external threat of a nuclear-armed Soviet Union. Through unity and strength, and with the strong support of our allies, we faced down that threat.

Today, the threat to the US appears to be internal, from the polarizing divisions we have been witnessing for some time along political, economic, and racial lines. It leaves many wondering if these divisions may be too great to overcome. Yet, through the years I’ve seen deep divisions dissolve through prayer, so I know healing is possible.

Send a comment to the editors
NEXT IN THIS ISSUE
Image and Inspiration
'In hope that sends ...' 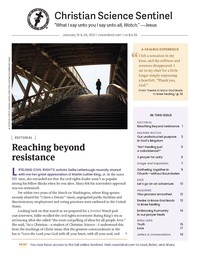