How the Christmas story fixed a friendship

“’Tis the season to have drama, Fa-la-la-la-la …” I sang ironically.

The frosty ground crunched underneath my boots, while my attitude, I must admit, was equally frosty. I was too busy feeling frustrated and unsettled about a friendship to feel even a hint of the Christmas spirit.

I definitely wasn’t in the mood to read the Christmas story. But I had a Christian Science Sunday School class to prepare for, so when I got home, I pulled out my Bible. I was not expecting this story to become a handbook for dealing with difficult relationships.

“Now the birth of Jesus Christ was on this wise,” the Bible says. “When as his mother Mary was espoused to Joseph, before they came together, she was found with child of the Holy Ghost. Then Joseph her husband, being a just man, and not willing to make her a public example, was minded to put her away privily. But while he thought on these things, behold, the angel of the Lord appeared unto him in a dream, saying, Joseph, thou son of David, fear not to take unto thee Mary thy wife: for that which is conceived in her is of the Holy Ghost” (Matthew 1:18–20).

My heart went out to the guy. Think about it. You’re all set to marry this girl, and out of the blue she tells you she’s pregnant … and it’s the Son of God? Of course, we have no idea what Joseph was thinking, but I could imagine how unsettled, confused, and maybe even heartbroken he might have initially felt. “While he thought about these things,” the story says. Doesn’t that capture the essence of so many of our relationship challenges? Feeling stirred up or worried about what another person has said or done, or what they might be thinking?

God was doing for me today what had been done for Mary and Joseph centuries ago.

But here’s the hopeful part. Joseph and Mary both got their own angels. (You can find Mary’s version of events in chapter 1 of the book of Luke.) And while the angels’ messages were unique, they did have one thing in common. A key part of each angel’s message was: “Do not be afraid.” And then in Joseph’s case, the angel went on to help him understand where Mary was coming from and to let him know that everything would be OK.

It dawned on me that no amount of talking or explaining would necessarily set things right with my friend. But it didn’t matter. We each had our own angels! I got out my copy of Science and Health with Key to the Scriptures and read this definition of angels by its author, Mary Baker Eddy: “God’s thoughts passing to man; spiritual intuitions, pure and perfect;…” (p. 581). We had God’s thoughts, divine Love’s thoughts, coming to each of us, meeting us where we were, and speaking to us in just the right way.

It’s easy to think we’re the ones having to say the right things or make someone else understand where we’re coming from. But the Christmas story shifted my perspective and put God at the center of my relationship “story.” It made the harmonizing, peace-giving power of divine Love paramount. It took away my frustration and fear and left me with a newfound trust that God was doing for my friend and me what He’d done for Mary and Joseph all those centuries ago. Isn’t that story a great handbook for all relationships?

That was the end of the friendship drama. Pretty soon, my friend got her own message of peace, and our relationship found even firmer footing. But the best part of that Christmas was the deeper understanding I got that no matter how confusing or upsetting things might get with the people we love, God’s angels are always there to say, “Do not be afraid”—and to set things right. 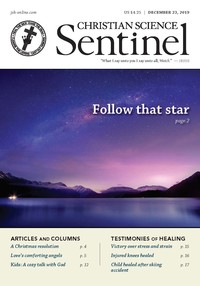