I would like to share several Christian Science healings our family has had of broken bones. The first was in May 1985, when my older son, Gus, was in fourth grade and was injured at a Boy Scout camp. I took him to a walk-in clinic to get X-rayed, and the X-ray showed that his collarbone was shattered. The doctors put a shoulder sling on to make him more comfortable and told me an orthopedic surgeon would have to set the bone with a pin. Based on the practical healing experiences we’ve had in our family, I was confident to turn to Christian Science for help, and so was Gus.

I stayed home from work for a week, and we worked with a Christian Science practitioner, who pointed out that we were not praying to heal a broken bone, but rather to know that in reality Gus was already God’s perfect, complete child. We affirmed that everything was in its right place under God’s government, and there could be no evidence otherwise. My son wore the shoulder sling for the week at home and a week back at school. Shortly after, he felt no further effects and was back playing baseball.

Send a comment to the editors
NEXT IN THIS ISSUE
Image and Inspiration
'The fullness of His glory ...' 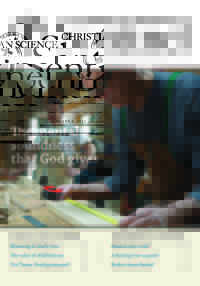