On the California recall

Not SINCE P. T. Barnum roared onto the scene have the words circus, suckers, and clowns been used so often. At least that's one conclusion from an informal survey of news stories on California's recall election. The crowd of characters running for governor is so big and colorful, so the opposite of drab, that describing the event in circus terms is almost irresistible. Or it would be if the turmoil surrounding the vote and the fiscal chaos facing the state were so not laughing matters. Barring any last—minute legal blockades, the vote to recall Governor Gray Davis, and the election of a successor if it prevails, takes place early next month.

In the meantime a solution—hungry electorate is, I believe, eager for sober words void of showmanship but filled with thoughtful insight. They want to hear problem—solving approaches to the crises that initially sparked the recall effort, such as mounting budgetary and energy troubles. They also are concerned about the recall process itself, which is widely regarded as needing repair.

Channing Walker is a contributing editor. He lives in Glendora, California, where he works as a Christian Science practitioner. 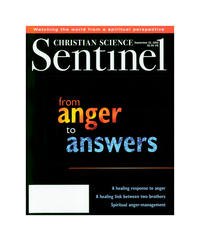