ONE FAMILY the world over

BEING A SOCIOLOGY MAJOR , with a co-major in religion and philosophy, I was enthusiastic about taking part in a pilot study-abroad program sponsored by my college. The upcoming trip to several Islamic countries in North Africa was under the auspices of the Institute for Mediterranean Studies in Berkeley, California, and students and faculty from several colleges would be participating. It would be the first time I had traveled abroad, and I was looking forward to this on-site comparative study of the history of religious views and practices in different civilizations.

It was winter break, and I was staying at my parents' apartment in New York City. In preparation for the trip, I went to talk with one of my former Christian Science Sunday School teachers. She was also a Christian Science practitioner, and originally from Armenia. She told me that cultural traditions, religious outlooks, and even the food and water were very different in that part of the world where I'd be traveling. In order to feel at home wherever I went, she recommended that I adopt a spiritual view of the universe by acknowledging that everyone, both my fellow men and women and I, were governed by the one Mind that is God. We talked about the need to pray daily by seeing myself and others as the good expression of this one Mind. In the light of this spiritual fact, we were all one family, "living, moving, and having our being in God" (see Acts 17:28).

Following a career as a sound recording engineer, Peter Jensen moved into international sales and marketing. He and his family live in Chesterfield, Missouri.

Send a comment to the editors
NEXT IN THIS ISSUE
Article
Rest, renewal, and delight 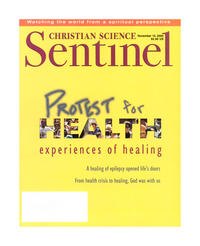