'The end of the beginning'

In The Late 1970s a new health threat emerged on the world scene. By 1981 this threat had been named Acquired Immune Deficiency Syndrome, and given the acronym, AIDS. For 20 years now, it has attacked the population globally, infecting more than 60 million and becoming the most devastating assault on human life the world has ever faced. In Africa alone, some 2.2 million people died of AIDS last year.

This health threat was originally concentrated in certain segments of the population and largely ignored by polite society. In fact, because it can be transmitted through sexual contact and intravenous drug use, AIDS is still seen by many as a punishment for immoral behavior. But this conclusion is both unfounded and misleading. It does not address the millions—including newborn babies—who are infected innocently. And it does not acknowledge the fact that a universally loving and infinitely patient God would never send disease into the world. It's time for AIDS to be seen for what it is: an illegitimate scourge on the human family—our family. 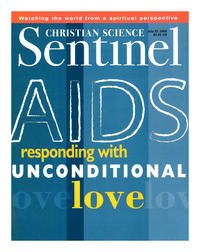