People attending the Church of Christ, Scientist, in Kent, Ohio, have gotten used to the sight of a 6-foot, 2-inch Kent State University student in sneakers sprinting up to the main door of the church.

He is Trevor Huffman, an education major specializing in English, who made an impressive debut as a combination point guard and shooting guard on the Golden Flashes team, which reached the NCAA Division One tournament for the first time in its history. We talked with Trevor just after he had returned with the Golden Flashes from a tour of Italy and the Netherlands. 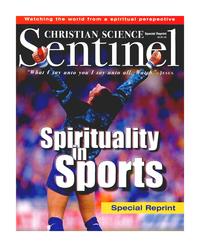