Religious freedom—always to be "demanded and cherished"

In 1993 when the United States Congress passed the Religious Freedom Restoration Act (RFRA) and President Clinton signed the bill into law, it was hailed as a significant and proper step in reinstating basic constitutional guarantees of the free exercise of religion. Although the so-called "peyote decision" by the U.S. Supreme Court in 1990 became the key motivation for congressional action, a number of churches and a growing number of citizens had become concerned about the steady erosion of religious liberties that seemed to be resulting through various court decisions. Of course, no one could ignore the fact that other values in society had been eroding as well and that the threat to religious freedom wasn't occurring in a vacuum.

When significant court cases were appealed to the U.S. Supreme Court in recent years, the decisions being handed down appeared to many observers to indicate that the balance had swung dangerously toward the side of the government's political, financial, and secular interests, which were beginning to outweigh legitimate rights of individuals. This imbalance is what RFRA was intended to correct. Its purpose has been to provide a clear mandate in law that government may not substantially burden and individual's free exercise of religion without proving that the burden is in furtherance of a compelling governmental interest and is the least restrictive means of furthering that interest. 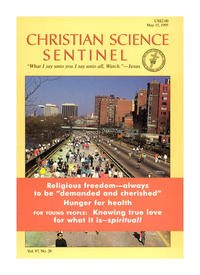