Is radical reliance on God dangerous?

I was a newcomer to Christian Science. I had always thought of the word "radical" as meaning extreme—even dangerous. Now I was being exposed to the term in connection with reliance on healing. "Christian Science healing sure is different," the thought kept recurring, "but is radical bad?"

Eventually I got beyond that impasse, became an ardent student of this Science, and found radical reliance on the healing power of God to be a natural and important part of Christian Science. Mary Baker Eddy, the Discoverer and Founder of Christian Science, states, "It is not wise to take a halting and half-way position or to expect to work equally with Spirit and matter, Truth and error." On the same page she says: "Only through radical reliance on Truth can scientific healing power be realized." Science and Health with Key to the Scriptures, p. 167; 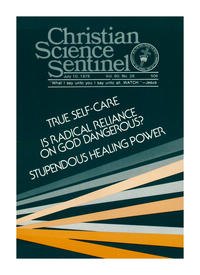