Nothingness Is Powerless to Resist Somethingness

There has always been resistance to Truth. Christ Jesus found that his teachings were unacceptable to the Hebrew leaders. Mrs. Eddy hoped that her discovery of the Science of Christianity would be welcomed by all Christian churches, but instead it was largely misunderstood. And still today materialistic ideologies and systems resist religion based on the allness of Spirit, God.

Even among committed Christian Scientists there may sometimes be resistance to regular study of the Lesson-Sermon and to deep study of the Bible and Mrs. Eddy's writings. It is by such prayerful study, however, that one is able to grow in spirituality and gain the understanding of God and of man as His expression, which heals.

Send a comment to the editors
NEXT IN THIS ISSUE
Article
Dethrone That Tyrant, Time! 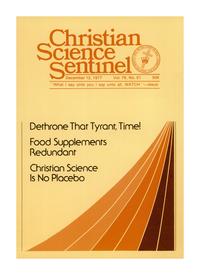