Defining "thought" Webster says that it is "a mental state chiefly characterized by a process of reflection;" and he draws a clear line of demarcation between actual thought and its counterfeit, the mortal, mental modus, in the explanation that it is "mental concentration on ideas as distinguished from sense perception or emotions." Of the word "think" a dictionary gives us two meanings, according to the root whence the word is derived,—"to reflect," and "to seem;" and "thinker" is defined as "one who thinks in a specified way." Considering these words, as analyzed, we see plainly the great gulf fixed between real thinking, which is the reflection of God's thoughts or ideas, and the phenomena of erring, material belief, which is as variable as are the shifting illusions of sense-perception, and as valueless as the unenlightened human emotions. Mortal thought, ever egotistic, clamors: I do my own thinking; you do yours. This is the claim of minds many. It is the mist which went up from the earth. It has no relationship to the true mental modus, the truly "specified way," which characterizes the thinker of whom the world has need. That way, in its humility and accuracy, has, as its eternal basis and standard, the first phrase of the Scripture, "In the beginning God."

The mortal mode is anarchical (every man making a law for himself—God's law forgotten), ultimating in a very tower of Babel—strife and confusion. True thinking is, in the order of divine reflection, the very law of heaven come down to earth, its fruitage health, holiness, spiritual understanding, spiritual power. To students of Christian Science these facts become even more apparent; and equally so becomes their need of the humility and teachableness which characterized our Leader, that each one may be found "a willing disciple at the heavenly gate, waiting for the Mind of Christ," as Mrs. Eddy says on page ix of the Preface to "Science and Health with Key to the Scriptures." This was the mental attitude that characterized the holy men of old. Those patriarchs and prophets who proved the presence and power of God to their age had the law of God within their hearts, and bade others to bind it as a frontlet between their eyes. So-called mortal mind, attempting to do its own thinking, measured by this standard was found sadly wanting; and Isaiah protests "to the law and to the testimony: if they speak not according to this word, it is because there is no light in them." 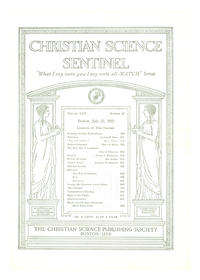