The first command in the Bible is, "Let there be light." Truth has never departed from humanity, although its flame may have appeared to burn low. The light reflected by the patriarchs touched the prophets; that reflected by the prophets touched Jesus and his followers; and that of Jesus touched Mrs. Eddy and her followers, so that they are to-day the beneficiaries of this one continuous light, which, like the ancient watch-fires upon the mountain peaks, has served these uncounted generations as a warning of sorrows or as a signal of joy. All who are saved from self—our only salvation—must walk in this light, which was from the beginning, and which can never be dimmed by any human occurrences. Although to our senses the sun may be obscured by a fog, it is always shining.

Light symbolizes truth, revelation, progress. The capacity of mortals to see the true light is so small to-day that they are likely to measure the light by their own limited ability to see it and thus attempt to limit the possibilities of those about them. Peter spoke of the "light that shineth in a dark place, until the day dawn, and the day star arise in your hearts." Each one has all the light that he has acquired by earnest effort to prove the Science of being. Had the wise virgins given away some of their oil, their foolish companions would probably have spilled it in the dark, for had they not slept until the midnight hour without replenishing their lamps? Every Christian Scientist must put what he knows into practice or, when the hour of doubt and darkness comes, he will find himself lacking good. One can travel but a short distance on borrowed light. Sometimes counsel is needed; and, if it is given, it should always point the inquirer to a more careful study of the Bible and "Science and Health with Key to the Scriptures." 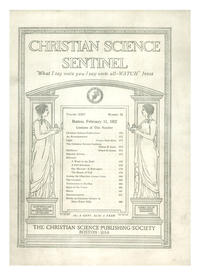