The Fifth Commandment, though it may seem almost the easiest to understand of the ten words of the Decalogue, is, in some ways, perhaps the most difficult. The social relations of the centuries before the Christian era were scarcely those of to-day, and what seems a very natural and almost unnecessary requirement in the twentieth century was hedged with all sorts of difficulties in the days of Moses. It seems to be quite apparent that the effort to avoid responsibility for the help of parents was not only common then, but was even connived at by the priests. Thus the word honor seems to have enjoyed a very much more comprehensive meaning than mere respect, and to have included both clothing and feeding. This, presumably, was what Christ Jesus was alluding to when he accused the scribes and Pharisees of making of no account the law. "For Moses," he declared, "said, Honour thy father and thy mother; and, Whoso curseth father or mother, let him die the death: but ye say, If a man shall say to his father or mother, It is Corban, that is to say, a gift, by whatsoever thou mightest be profited by me; he shall be free. And ye suffer him no more to do ought for his father or his mother; making the word of God of none effect through your tradition, which ye have delivered: and many such like things do ye." What Jesus meant was quite simple. Corban was the expression for something put aside for sacrifice, and so given to God. Therefore, the priests were encouraging the man to neglect honoring his father and mother, by the subterfuge that what they needed was already dedicated to God. In this way the plain meaning of the Commandment was set aside by a mere quibble.

Jesus' demand was for a return to the obvious meaning of the Commandment. But the Hebrew Scriptures were at all times an opportunity for enforcing the spiritual truth by means of material illustration, and Jesus no doubt saw clearly that the man who did not honor his material father and mother would be incapable of honoring his spiritual Father-Mother, God. The writer of the first epistle of John makes this quite clear, when he says, "If a man say, I love God, and hateth his brother, he is a liar: for he that loveth not his brother whom he hath seen, how can he love God whom he hath not seen?" Now, though Jesus was insistent that men should honor their material parents, he was equally clear that the real Father and Mother of all mankind was God, Principle. He told the Pharisees plainly that the material father was personified evil, meaning undoubtedly by this the belief that human generation was not the reality, but that spiritual creation was. And this he made equally clear to the multitude when he insisted, "Call no man your father upon the earth: for one is your Father, which is in heaven." And this is surely what Mrs. Eddy is referring to when she writes, on page 416 of Science and Health, "The material body, which you call me, is mortal mind, and this mind is material in sensation, even as the body, which has originated from this material sense and been developed according to it, is material. This materialism of parent and child is only in mortal mind, as the dead body proves; for when the mortal has resigned his body to dust, the body is no longer the parent, even in appearance." 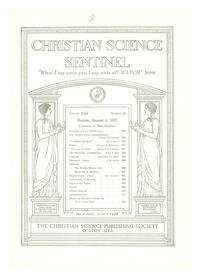