THERE is in the collection of prophecies known as the Book of Isaiah, a cycle sometimes described as the Messianic prophecies, and sometimes as "the Servant." These represent the picture, drawn by the writer, of the conditions which would surround the man who should act in such obedience to Principle as to have earned the title of the servant of Jehovah. The author saw clearly that the course of the servant would be marked with righteousness. He saw that he would be a man of extraordinary gentleness and yet of extraordinary strength. In his presence the wolf would dwell with the lamb, and the leopard lie down with the kid, nevertheless he would smite the earth with the rod of his mouth, and with the breath of his lips slay the wicked. But the prophet saw much further than this. He realized the terrific moral fermentation which the presence of such a teacher would arouse, and the inevitable chemicalization which would dog his footsteps. Therefore he pictured him as despised and rejected, as a man of sorrows, and acquainted with grief. He was to bear the transgressions of the world, and to be wounded for those transgressions. That was the view taken by the writer, presumably in the third century before the Christian era, of the man who should engage in the contest of good with evil. It was a natural view to a man writing midst the surroundings of the eastern world of those days. But it was very far from being the whole truth.

Some three centuries later the servant walked in the flesh in Palestine, and the story of his ministry is recorded in the Gospels. The prophet in his eastern home had not had Jesus of Nazareth in his mind's eye when he was writing, but his knowledge of Principle had enabled him to know, with unfailing sagacity, exactly what would happen, given the conditions he pictured. What, in the somber surroundings of his time, he failed to realize was that the sorrows of righteousness were coupled with the joys of righteousness, and that whilst the sorrows were for the unredeemed neighbors of the servant, the joys were for himself and for those who, like himself, understood Principle. Christ Jesus, also, drew his picture of the servant, but it was not set forth with the same unrelieved depression as that of the earlier prophet. He saw the servant in the good shepherd as opposed to the hireling; he saw him in the wise virgins as opposed to the foolish; and he saw him in the good steward who multiplied his talents in contradistinction to the wicked and slothful steward who was satisfied with burying his. The wise virgins and the good steward gained the reward of their obedience to Principle. The first went in to the marriage feast, whilst of the second it was said, "Well done, thou good and faithful servant: thou hast been faithful over a few things, I will make thee ruler over many things: enter thou into the joy of thy lord." 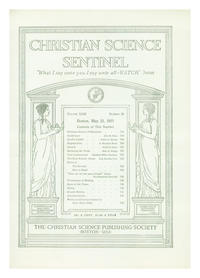