The True Man and the Sham

The more the truthfulness of anything real and eternal is learned, the more apparent becomes the falsity of any untruth about that which is true. In other words, a knowledge of the real discloses the falsity of the unreal. This axiom, so to speak, has no more striking illustration than in the correct teaching of Christian Science as to perfect and immortal spiritual man, as compared with erroneous mortal man. As devout students of Christian Science are learning by degrees, through demonstration, of the majesty and grandeur of the perfect man of God's creating, the shallowness and utter baselessness of the claims of mortal man are perceived. A practical instance of the ability to detect the untrue, as a result of knowledge of the true, may be seen in the government mints. The coiners at the mints, who are thoroughly familiar with the molds, texture, and designs of the legal national currency, are, because of the possession of this knowledge, able to detect the discrepancy of counterfeit currency should it be presented to them. Each additional point gained as to the nature of the real and genuine dollar increases proportionately the capacity to detect the counterfeit dollar.

There is a universal belief that man is a material organism, with a mind contained in the cranium, and this man is held to be the veritable man of God's creating. Upon this type of man, which is the only man that mortals uninstructed by Truth know of, mortal belief places the burden of solving the problems of life. Millions upon millions have believed in the verity of this man, and have pinned their faith to him, to bring them that which seemed to their sense most desirable. In some cases it might appear that this matter model has attained to seeing heights of happiness, but in far more instances the debris of human hopes and aims are seen strewn in the wake of mortal man's earthly experience. The multitudinous failures and the unexpected and complete wreckage of the best laid and most cleverly formulated plans of the most intelligent of humanity, would awaken mortals from reliance upon that which is false, were it not for the density of mortal belief. The tenacity of error is, in belief, the resultant of generations and generations of false beliefs, but all of these false beliefs can be rendered null and void here and now by an understanding of man in the image and likeness of his Maker. This one can prove beyond the shadow of a doubt to-day. 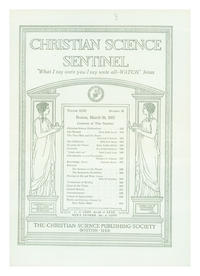