Gradually mankind is waking to the realization that it lives in a world of thought. Perhaps no simpler example of this is found than the obvious fact that actions are first thought before they can be carried out. A large project may be conceived, and every step from the designer's plans to the least movement in effecting them is the result of thought. It follows necessarily, then, that a man's actions are the true indication of his thinking. The world has long seen this and expressed it in the old adage, "Actions speak louder than words," but in its endeavor to determine the motive from which a deed originates, the world has been very far from sounding the depths of the real motives from which human actions spring. It of course takes one step, and sees that if a man acts dishonestly he is obviously thinking dishonestly, no matter how much he may try to hide this with words. The world calls this an example of the adage, condemns the man, wishes he might reform, and there drops the matter. Now to the thinker, dishonest actions express much more than the world sees in them. It is obvious that the individual expects to gain by being dishonest, and this gain is always material things, or can be measured in terms of material things. This is the crux of the whole situation. The world does not see it and certainly the individual does not, but it is nevertheless true. The real meaning of the dishonesty then is this: The individual believes he lives because of matter, lives in matter, and is made happy by matter; hence his effort to accumulate matter by any means.

The world long ago found out from hard experience that in the end a man gained nothing by dishonesty, and so came the saying, "Honesty is the best policy;" but if a man's honesty is no more than policy it has a weak foundation indeed. It is because so much of the world's honesty has just such a foundation that so frequently the individual forgets his better sense and fails in some instance to be honest. But a little real understanding changes all this. When once a man understands the fact that life is spiritual, not material, nothing could induce him to darken his spiritual vision with a dishonest act. The temptation may come with all the usual alluring arguments to make this one exception, for there is so much to be gained. To the materialist whose honesty is based on policy it may seem that as there is always supposed to be an exception to every rule, this is the exception. If he sees no more than the choice between an honest or a dishonest act he is comprehending little what his decision reveals. Had he gained some perception that life is spiritual, he would know that there is no exception to the rule of righteousness and would discern that his choice really expresses his belief regarding that most fundamental question, "Is life spiritual or material?" Then he would see how far-reaching is his choice and he would never hesitate a moment in his decision. 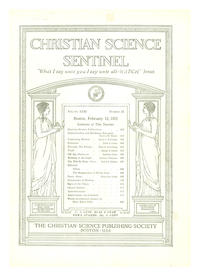