Every error confronting one is but a glorious opportunity of proving God's allness,—the omnipresence of infinite good. If the error be lack, the opportunity is present in which to prove the bounty of Spirit forever at hand; if sickness, the presence of the vigorous, energizing activity of Mind, the indestructible unity of Principle and its idea, sustained, protected, instantly radiating the health of the one perfect creator; if misunderstanding between brethren, the presence of the all-knowing, all-loving intelligence, which is man's true consciousness here and now, in which no misunderstanding could possibly exist. So one could go on indefinitely; for every inharmonious condition which presents itself as consciousness, a mortal creation, or a material universe, is simply a misconception or reversal of the one spiritual, harmonious universe of God's creating, forever expressed. The one spiritual universe operating in accord with the law of the one infinite intelligence is all the universe there is. The fact or truth of all creation is all the presence there is.

The fact in place of any discordant condition or circumstance can be proved by any one who will reverse the evidence of the senses and will claim that even where the wrong condition seems to be, the spiritual idea is forever and continuously operating according to the law of Spirit. On page 313 of "Science and Health with Key to the Scriptures," Mrs. Eddy writes: "Jesus of Nazareth was the most scientific man that ever trod the globe. He plunged beneath the material surface of things, and found the spiritual cause." Jesus proved by his absolute knowledge of spiritual fact, refusing to accept a discordant condition of any kind, no matter what the appearance might claim to be, that he was, as Mrs. Eddy states, "the most scientific man that ever trod the globe." 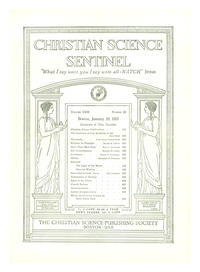