The carnal or mortal mind, under various aliases, all down the centuries, has tried to drown or stifle the voice of Truth, but the law of God, operating silently, unobtrusively, counteracts this labored effort; and the voice of Truth is not and cannot be stilled. Pharaoh thought that by drowning all the male Hebrew children he could drown the Christ-idea and the voice of freedom, but God's protecting care and wisdom made the edict of the king to react against him, in having Moses brought up in his own home to become the great leader of the Hebrew people. Then history repeated itself, at the birth of Jesus, in the decree of Herod to destroy all the male children; but God again protected His idea. When Christ Jesus by his loving work and demonstration of healing had proved spirituality, mortal mind again again sought to destroy the great Exemplar and those who by his teaching were substituting for the gross materiality of the age a knowledge of the unreliability of the testimony of the physical senses and the omnipotence of divine Mind to overcome selfishness, greed, dishonesty, deceit, self-aggrandizement, and the legion of erroneous beliefs.

On account of the limitations of the age, only a comparatively small class of students was able to comprehend the teachings of the Master, and when these had passed away their followers gredually lost the spirit and became more concerned with the letter of the Master's teaching, thus ascribing less to the power of divine Mind. With the introduction of the printing press and modern methods of transportation the world had become ready for the voice of Truth to be again heard, and Mrs. Eddy has in "Science and Health with Key to the Scriptures" declared to the world (Pref., p. vii), "To those leaning on the sustaining infinite, to-day is big with blessings." Throughout the book she enunciates in clear-cut phraseology the rules by which man in the image and likeness of God can know he is governed by Principle and not by false beliefs, and closes these rules with the beautiful interpretation of the twenty-third psalm (p. 578). "Surely goodness and mercy shall follow me all the days of my life; and I will dwell in the house [the consciousness] of [love] for ever." 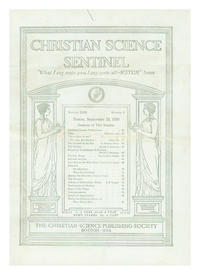